Telit introduced the LTE-A Cat-18 module LM960, capable of supporting speeds up to 1.2 Gbit/s in the downlink and 150 Mbps in the uplink. Such speeds are necessary, for example, when streaming video from the scene in high resolution or for distributing the Internet in an emergency situation from a mobile platform. 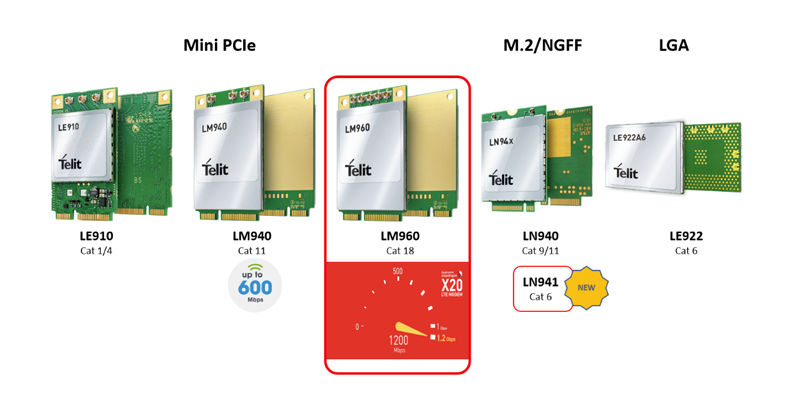 The Telit LM960 module is assembled in a PCI Express Mini Card (mPCIe) format. Telit calls it the first Cat-18 mPCIe module. It will be purchased by FirstNet operator for use in various devices used by emergency workers, in particular, in mobile and portable wireless routers installed in ambulances and other special vehicles.

The LM960 module supports both in-band and in-band carrier aggregation (up to 5) to achieve 1.2 Gbit/s throughput in the downlink with a 4×4 Mimo mode and 256-QAM modulation (up to 5). 150 Gbit/s in the uplink). Telit’s product can also operate in up to 23 different LTE bands (16 LTE FDD and 7 LTE TDD bands) including Band 14 (700 MHz), used in the United States for public safety, as well as 3.5 GHz CBRS Citizen Band Radio Service) bands and LAA 5 GHz (LTE-License Assisted Access), the latter allowing to improve performance in particular buildings in addition to the “traditional” cellular service.

The Telit LTE Module also supports several satellite positioning technologies, including GPS. In addition to supporting band 14, the LM960 operates in all other frequency bands that FirstNet uses to provide connectivity to the systems used by the emergency services. The LM960 is capable of operating in a temperature range of -40 ° C to + 85 ° C and also incorporates a four-constellation geolocation satellite subsystem (GNSS) and two SIM cards.
Telit LM960 Specs and Features
The LM960 module is based on the Qualcomm Snapdragon X20 LTE Modem chip and below is the general specs for reference:
The ruggedized LM960 module is derived from the Cat-11 compatible LM940 and the two cards are interchangeable, says Telit, which offers developers the ability to launch new equipment (routers, gateways, etc.) built on designs already using the Telit LM940, or to create product families with different performance levels (the LM960 for the high-end, the LM940 for the mid-range).
Telit LM960 Price and Buy
Since Telit LM960 is not available in the market for volume and just in the range of testing. The Telit LM960 price is high and there is only few online stores who can supply the samples time to time. We 4GLTEMALL.com could supply the Telit LM960 samples but not stably. If you want to buy the Telit LM960, you must pre-order first to get it.