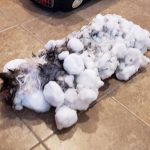 A very lucky cat in Montana is happy and healthy after thawing out — literally — at an animal clinic over the past week following a miraculous rescue.

Fluffy arrived at an animal clinic of Kalispell encrusted in snow and “unresponsive” last week, but now the survivor feline is “completely normal,” a Facebook post from her saviors ensures.

According to news reports, the cat’s owners found the outdoor feline buried in a snowbank. The animal was likely stuck for hours in Montana’s freezing temperatures. Once found, a frozen Fluffy was freed and brought to the clinic.

The owners of Fluffy, who live in Kalispell, Montana, in the far northwest of the state, found her in a snow bank on Jan. 31 — unresponsive, with her fur matted with ice. The low in nearby Whitefish was a bone-chilling 8 degrees on Jan. 31, and they had received about 16 inches of snow for the month.

The animal clinic, owned by Dr. Clark, recounted how the owners found Fluffy in the snow. They immediately worked on warming the feline, who wasn’t moving when she arrived at the clinic.

“She’s crouched down looking like she’s hunting something or something’s in the snow bank,” Clark said. “And then they realized, oh my gosh, she’s not moving.”

“These crabby cats are survivors,” Clark said. He said Fluffy is 3 years old and has always lived outdoors. He suspects something happened to Fluffy to cause her to curl up outside the way she did.

“I suspect that something traumatic happened,” Clark said. “Either something fell on her or she fell or something chased her and she got injured. … She couldn’t get back to her normal little hiding spots that she goes to.”

“I’ve never seen this. I’ve been in practice for almost 24 years and she was actually caked in ice, like those ice balls were caked on her all the way around her 360 degrees all the way around her. Her temperature was so low our thermometer wouldn’t read it, so we know it was less than 90,” Dr. Clark told new reporters.

Fluffy was covered in heating pads and given a warm bath to help stimulate her body. Several hours after she arrived at the clinic, Fluffy was moving again. Dr. Clark then took the cat to an emergency animal hospital since her temperature was still dangerously low.

Her temperature was so slow it didn’t even register on a thermometer — with a bottom range of 90 degrees. According to Clark, cats’ temperatures normally are around 101 degrees.

After about two hours of using warm water and blankets, the cat’s temperature was still too low, so they took her to the emergency room. After a few more hours, Fluffy finally began to show signs of recovery.

Fluffy was on her way to a full recovery after several hours at the emergency facility.

A week after being dug out of the snow, Fluffy and her gorgeous coat of fur are back to normal.

“Fluffy is amazing,” the clinic of Kalispell wrote in a Facebook post about the cat’s cold journey.

Following this incident, Fluffy is now strictly an indoor cat.

Dr. Clark hopes that pet owners who see this story take it as a reminder to pay extra attention to both indoor and outdoor animals during cold weather.