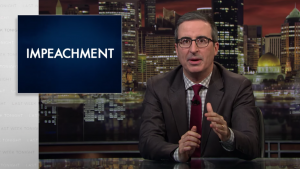 The latest episode of HBO’s Last Week Tonight tackled an 11-letter word that’s becoming an increasingly popular topic of conversation among House Democrats: impeachment. On Sunday, host John Oliver explained why impeachment is necessary, arguing that while it may not remove President Donald Trump from office, it’s still worth proving that no one is above the law.

“It’s one of the most consequential decisions a legislature can make,” Oliver said about impeachment. “But more importantly, it’s also an anagram for ‘pinch me meat,’ which is, interestingly, the sentence that got the Lucky Charms leprechaun #MeToo-ed.”

Oliver went on to say that impeachment had become “a major talking point” among House Democrats, with 63 of them supporting an impeachment inquiry. Still, as Oliver goes on to point out, not every House Democrat has warmed to the idea. “House Speaker Nancy Pelosi has repeatedly attempted to apply the brakes to an impeachment inquiry, claiming the country is not behind it and that, in fact, they barely understand what it actually means,” Oliver said. Of course, if anyone was willing to walk the country through a thorough explanation of impeachment, it’s Oliver.

“It is true that many people don’t fully understand what impeachment involves, so we thought tonight might be a good time to discuss what it is, why it may be warranted, and what the risks might be in carrying it out,” he said.

The late-night series host explained that while Bill Clinton and Andrew Jackson were both impeached when president, neither were actually removed from office by the process. Richard Nixon, one of the only other presidents to have an impeachment process initiated against him, chose to resign before the process could be finished.

Presidents are only removed from office following impeachment proceedings, which begin with the House of Representatives passing articles of impeachment, if a two-thirds majority of the Senate votes for that. Still, Oliver argued that special counsel Robert Mueller’s report had showed that, despite Trump’s claims to the contrary, the president had committed “high crimes and misdemeanors.”

“One area where we already have considerable evidence against Trump is obstruction of justice,” Oliver said. “It’s a very serious allegation. It was among the articles of impeachment approved against both Nixon and Clinton. Obstruction was also half of Robert Mueller’s report, in which he laid out 10 potential instances of it taking place.” 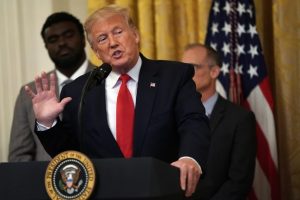 According to Oliver, one of those instances is then-White House Counsel Don McGahn’s under-oath claim that Trump had ordered him to fire Mueller and then later asked him to deny he’d been asked to do so. “It seems the president obstructed justice — then obstructed justice again to obstruct the investigation into his obstruction of justice,” Oliver said. “It’s ridiculous.”

“I know that this might seem like a legal technicality and a couple of phone calls that didn’t go anywhere, but here’s why it really matters: But for Don McGahn, Trump might have stopped an investigation into himself,” Oliver continued. “And if a president can shut down an investigation, he can basically do anything with no consequences. It’s a big, big deal.”

For Oliver, an impeachment inquiry is important, as it would, among other things, “shine a light” on the information contained in the Mueller report — a lengthy document few in the public have read completely. “Even if Trump is not removed, which he probably won’t be, the process could shine a light on the content of the Mueller report, potentially lead to new revelations about Trump’s conduct, and force his Republican allies to choose publicly and on the record whether or not to hold him to account,” Oliver said.

While acknowledging that impeachment can have risks (case in point, Clinton’s impeachment boosted his and Democrats popularity), Oliver argued that not opening an impeachment inquiry despite being confronted with potential evidence sends a dangerous message.

“If nothing else, we’d be standing by the basic fundamental principle that nobody is above the law,” he said.