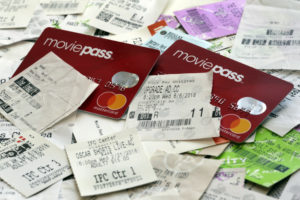 MoviePass, once a revolutionary ticketing service, is temporarily shutting down on Saturday and it’s unclear if it will return.

MoviePass, the service that allowed film buffs to catch flicks at a discount, will stop operating this week and may not return, according to its owner.

The film ticket app will stop operating as of Sept. 14, according to Helios and Matheson Analytics Inc., the firm that owns roughly 92% of its shares because “its efforts to recapitalize MoviePass have not been successful to date,” the firm said in a statement. “The company is unable to predict if or when the MoviePass service will continue.”

It’s an abrupt but not an altogether unexpected ending for the service, which once had millions of subscribers drawn to the prospect of being able to see as many films as they wanted for $10 a month, but then teetered in the wake of a series of setbacks.

The most recent issue surfaced in August, when website TechCrunch reported that debit card numbers belonging to MoviePass subscribers, along with other personal information had been exposed.

The company said in a statement at the time that it had recently discovered a security lapse and that the system was quickly secured.
MoviePass’ CEO Mitch Lowe posted a letter on the service’s website Friday that said “at this point, we are unable to predict if or when the MoviePass service will continue.”

Helios and Matheson (HMNY), the parent company of MoviePass, announced that it would be interrupting the service on Saturday. Helios and Matheson’s efforts to recapitalize MoviePass have “not been successful to date,” the company said in a press release on Friday.

“The Company is unable to predict if or when the MoviePass service will continue,” Helios and Matheson said in the statement. “The Company is continuing its efforts to seek financing to fund its operations.There can be no assurance that any such financing will be obtained or available on terms acceptable to the Committee.”

MoviePass sent shock waves through Hollywood in the summer of 2017 when it dropped its monthly subscription fee to $10 a month, which allowed users to see one movie a day. After that, the service grew rapidly to 3 million subscribers in less than a year.

From the start, the surprisingly low subscription fee and surging subscriber base prompted many in the film industry to wonder how sustainable MoviePass’ business model actually was.

Helios and Matheson issued a dire warning in April of 2018 about the company’s ability to stay in business.
MoviePass eventually raised its prices and began to limit access to blockbuster movies. In December, the company announced that it was changing its prices once again, this time adopting a tiered plan.

All of MoviePass’ issues —from film restrictions to a glitchy mobile app — led to a subscriber exodus (Business Insider reported in April that the service had about 225,000 subscribers). Helios and Matheson’s stock took a major hit as a result, dipping to as low as 2 cents.

MoviePass then confirmed last month that a security issue may have exposed customers’ records.

Despite the service’s potential demise, it has arguably changed the theater-going experience.

Subscription services similar to MoviePass in spirit, but not in price, have popped at major movie chains such as AMC and Regal.

“Although we do not currently know what the future holds for the MoviePass service, we hope to find a path that will enable us to continue the service in the future,” Lowe wrote on Friday.

When it first launched, MoviePass was a magnet for film fans who were able to subscribe and see as many movies as they wanted during the month for less than what many filmgoers paid for a ticket to a single screening.

Subscribers were alerted Friday that MoviePass was going to cease operating. Helios and Matheson Analytics said in its statement that it is considering selling the company, getting rid of individual assets like MoviePass and Moviefone, or possibly reorganizing.

Over the past several months, MoviePass™ worked hard to relaunch its groundbreaking subscription service and recapitalize the company. While we were able to relaunch the service for some of our subscribers with an improved technology platform, our efforts to recapitalize the company have not been successful to date. As a result, it pains us to inform you that effective at 8 a.m. E.T. on September 14, 2019, we must interrupt service for all current MoviePass™ subscribers. MoviePass™ will be providing subscribers with appropriate refunds for their period of service already paid for. Subscribers will not need to request a refund or contact MoviePass™ customer service to receive a refund. Subscribers will not be charged during the service interruption. At this point, we are unable to predict if or when the MoviePass™ service will continue.

We still deeply believe in the need for the MoviePass™ service in the marketplace, to maintain affordable access to theaters and provide movie lovers with choices of where to go to the movies. In August 2017, MoviePass™ began a transformation of the moviegoing industry by introducing its low monthly price subscription service. Since then, others in the industry have followed our lead. Now, as a result of this transformation, movie lovers throughout the United States have the ability to see movies in theaters using subscription services at prices they can actually afford, albeit with limited choices of theaters using those services. In the course of this industry transformation, MoviePass™ has experienced setbacks and challenges that are well known. Nevertheless, MoviePass™ remained committed to leading and competing in an industry that is resistant to outside competition and change. We believe that fostering competition and change in the moviegoing industry is critical to the satisfaction of the moviegoing public and filmmakers alike.

We thank you for your loyalty to MoviePass™ and sharing our vision for the industry. Although we do not currently know what the future holds for the MoviePass™ service, we hope to find a path that will enable us to continue the service in the future.