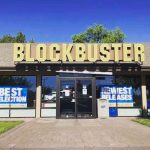 A man parked his motorcycle on the sidewalk Saturday morning, ruining the aesthetic of the last remaining Blockbuster in the contiguous United States.

“You can’t park there,” general manager Sandi Harding told the man as he walked into the store in Bend, Ore. “People are trying to take pictures.”

The man paused for a beat. There was confusion in his response.

In 2004, at the company’s peak, city blocks and suburban strip malls nationwide were studded with 9,000 Blockbuster outlets, a onetime indelible fixture of the family movie night. But soon after, Netflix, Redbox and the cold march of digital progress eroded the customer base at each store.

Thousands of Blockbuster stores were shuttered through the beginning of July, leaving only three: two in Alaska, and one in Bend.

“Every day, even before this, people would drive by and see the ‘Open’ sign and say, ‘Oh my gosh. How are you still here? Why are you still here?’ ” Harding stated in a Saturday phone interview as her store buzzed with activity, including the arrival of the oblivious motorcyclist in the central Oregon city. 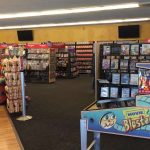 The notoriety has led to an uptick in activity. Tourists flock to the city nestled outside the Deschutes National Forest, eager to get selfies with the Blockbuster sign. Some even stop in to buy something, she said.

Harding has been with the company for 14 years and joined the Bend location on Revere in May 2005. She insisted that nothing big changed. Customer service keeps people coming back, and new titles, such as NBC’s current show “The Good Place,” are available for rent.

Even the IBM computers are running the same floppy disks from the 1990s, she said, shocking the younger employees.

“No one can hack these computers, so that’s a good thing,” she said.

But Harding conceded that the Internet and streaming services forever changed the way people consume entertainment, describing a “curve” from when Redbox and Netflix began to deliver more options.

It has been quite the fall from movie rental primacy. In 1989, a Blockbuster store opened every 17 hours, as reported last year. But in the late 2000s, it seemed that the stores were closing at that same pace.

Just a handful survived in the past few years since Dish Network bought the company in 2011 and dismantled most of the remaining locations.

And yet, some stores persevered. Harding said many of her customers have been loyal for years.

Others come in for the nostalgic stroll in the aisles, picking feverishly through the inventory to find an obscure film. And snagging the last copy of a new and popular release provides a small thrill you cannot get from a download button.

It was no coincidence that two of the last three Blockbuster stores were in Alaska. As Schmidt reported, an older population, long and dark winters and unusually high Internet usage fees conspired for the rental store business model to thrive there as it died elsewhere.

For a time, anyway. The stores in Alaska announced their closures on Thursday after increases on the property lease forced the operators out of business.

“[I]t is sad to say goodbye to our dedicated customers. We have thought of you as family for the past 28 years,” Kevin Daymude, the general manager of Blockbuster Alaska, said on Facebook. In a follow-up video on the page, two people dressed in black jointly place a candle in a parking space in front of the store and kneel in reverence.

The stores in Alaska will briefly reopen to sell inventory.

“What a great time to build your media library and share some Blockbuster memories with us,” Daymude said.

Even John Oliver could not save the Anchorage location. The host of HBO’s “Last Week Tonight with John Oliver” sent a jockstrap worn by Russell Crowe in the 2005 film “Cinderella Man” to the store in an effort to bring in customers. The unique piece of memorabilia was on display since May, the Associated Press reported.

While some might view Blockbuster’s fate as comeuppance — a big chain that displaced small, family-owned stores only to be destroyed by innovation — Harding sees her store as a mainstay of the Bend community.

Ken and Debbie Tisher are local owners, she said, and they pay a licensing fee to Dish Network to use the name. It is the local video store for many in Bend. That connection to the community is a key reason the Bend store has survived, Harding said.

And once in a while, the Blockbuster is a godsend.

When Gene Wilder died in 2016, mourners took to Netflix and other streaming services to watch films such as “Blazing Saddles,” “Young Frankenstein” and “Willy Wonka & The Chocolate Factory.”

No luck. Customers flooded the store and called to ask whether Harding had the titles in stock. Of course, Harding told them.

The directions are simple when you can’t find a film anywhere else. Just head west on Revere, past the Redbox on Third Street, to find exactly what you need.