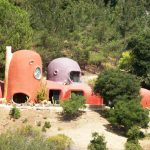 The house is owned by Florence Fang, a prominent member of the Chinese-American community in the Bay Area.

According to the lawsuit, she did show up to one of the permitting hearings, where inspectors told her she didn’t get permission to put up the dinosaurs and other yard decorations.

The town of Hillsborough sued Florence Fang last week, alleging she violated local laws by landscaping the yards of the orange-and-purple, bulbous-shaped house.

Local officials last year labeled the property with figurines of characters from “The Flintstones” animated cartoon series as a public nuisance. Fang installed large metal sculptures, a staircase, a parking strip, a deck and a driveway sign labeled “Yabba Dabba Doo” since buying the building in 2017.

Drivers can spot the hillside multi-domed home from Interstate 280. Architect William Nicholson designed it in the 1970s, the San Francisco Chronicle reported, spraying concrete over a wire mesh and steel frame.

“My grandmother hasn’t even seen the papers yet. She only learned this from the news today. I’m sure she will fight to save the Flintstone House though. Stay tuned,” her grandson Sean Fang said in a statement. “As a San Mateo County native, I think the dinosaurs are beautiful. They make everyone smile and should stay.”

Residents said dealing with Hillsborough Town Hall can be a challenge. Neighbor Situ learned that when she recently moved a tree.

A code enforcement panel ordered Fang to remove the features by December after determining the “highly visible eyesore” falls short of community standards. The city also charged Fang, former publisher of the San Francisco Examiner, a $200 penalty, the Chronicle reported.

“You had to ask, what is the circumference and when do I have to file paperwork to chop down a tree. You do have a lot of paperwork that you have to deal with,” she said.

The lawsuit asks a judge to make Fang remove the dinosaurs and figurines. Fang’s grandson said in a statement that she “will fight to save the Flintstone House.”

The lawsuit is not demanding anything be changed on the house, only that the dinosaurs and other yard items need to be removed.

“I think the dinosaurs are beautiful. They make everyone smile and should stay,” Sean Fang said.