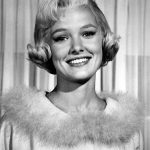 Beverley Owen, the actress who played the original Marilyn Munster on the iconic 1960s sitcom “The Munsters,” has died. She was 81.

Beverley Owen (born Beverley Ogg; May 13, 1937 – February 21, 2019) was an American television actress, best known for having played the original role of Marilyn Munster during the first season of The Munsters.

Beverley Owen was born Beverley Ogg in Ottumwa, Iowa, on Thursday, May 13th, 1937. In high school and college, she was always doing television, theater, and radio programs. She then moved to New York to pursue an acting career after graduating from the University of Michigan. She was fired many a time for her lack of typing skills while working at CBS, and for Ed Sullivan. She later became senior typist for the children’s program, Captain Kangaroo (1955) show. She did many small parts in shows until she got the role of “Marilyn Munster” on The Munsters (1964). But after just thirteen episodes, were filmed, she left the show to get married. She is now divorced, but has two daughters, Polly and Kate. She is not always recognized as “Marilyn” because, on the show, she wore a blonde wig. In 1989, she got her master’s degree in Early American History.

Her co-star Butch Patrick, who played half-vampire, half-werewolf child Eddie Munster on the series, confirmed Owen’s death in a Facebook post on Sunday.

“Beautiful Beverly Owen has left us,” Patrick wrote. “What a sweet soul. I had the biggest crush on her. RIP Bev and thanks for your 13 memorable Marilyn Munster episodes.”

Owen’s daughter, Polly Stone, said the actress died Feb. 21 in Vermont, after a battle with ovarian cancer. Stone told the outlet that Owen was diagnosed with the disease in January 2017, but had kept it private.

A representative for Patrick did not immediately respond for request for comment on his post and how he learned of Owen’s death.

Owen left her role on “The Munsters” in 1964, after the first 13-episodes of the CBS comedy’s 38-episode Season 1, to marry writer/producer Jon Stone. She was replaced by Pat Priest, who played Marilyn — the Munsters’ beautiful teenage niece, who was an outcast in the unusual family due to her normalcy — for the rest of the show’s 2-season run.

She is survived by two daughters, Polly and Kate.

Early Life and Education:
Owen grew up in Ames, Iowa where her father was a Professor of Agriculture at Iowa State University. She received an undergraduate degree from the University of Michigan, and she was a student of famed acting teacher Sanford Meisner. After college, she moved to New York to pursue a career in television production, taking the stage name Beverley Owen. She worked as a typist and secretary for CBS until she auditioned and appeared on Camera Three. Her performance on the show was spotted by talent agent Eleanor Kilgallen, who signed her to a seven year contract with Universal Studios. Owen appeared on Kraft Mystery Theater, The Virginian, Wagon Train, and in the feature film Bullet for a Badman starring Audie Murphy before landing the role of Marilyn Munster on The Munsters.

Personal Life:
Owen left her role on The Munsters to get married to writer and producer Jon Stone. They were married for eight years (1966-1974). She has two daughters, Polly and Kate. She continued to pursue her studies in Early American History, for which she earned a master’s degree in 1989. After The Munsters, Owen appeared in stage productions and commercials. In 1972, she played Dr. Paula McCrea for nine months in the soap opera Another World, which she recalled as being one of her favorite roles.

Death:
Beverley’s daughter Polly confirmed that the actress died of ovarian cancer on February 21, 2019 at the age of 81. Butch Patrick, her co-star on The Munsters released a Facebook statement on February 24, 2019 saying “Beautiful Beverly Owen has left us. What a sweet soul. I had the biggest crush on her. RIP Bev and thanks for your 13 memorable Marilyn Munster episodes.”