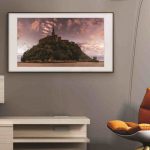 Samsung is one of the most prolific manufacturers of TVs around these days, and its newest designs promise a whole new level of stunning design and picture quality. Think the new 8K TVs that Samsung added to its lineup this year, as well as its Frame TVs that can be hung on the wall and display a beautiful piece of art whenever the TV is not in use as such. That’s one of a few different examples we could point to of Samsung trying to think of the TV as something other than a bland, utilitarian box.

And the South Korea-based consumer electronics giant may still have lots more up its sleeve for us in this regard. We know, for example, about the release of its one-cable TV, which uses a transparent cable to connect to the power supply as well as any peripherals. But when you’ve got one cable, the natural next step is to move forward with a cable-free TV, which appears to be what Samsung has in mind based on a newly discovered patent filing.

Samsung Electronics actually filed a patent that depicts this idea with the World Intellectual Property Office. Specifically, it envisions a wireless power transceiver and display. 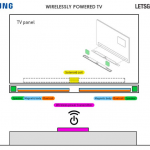 The patent was just published a few days ago, on February 28. One idea for powering a TV wirelessly might be to use a wide coil. However, the tendency to make TV sets increasingly thinner means there’s no room inside to house such a coil. Samsung’s solution, according to this new patent, is a bar that’s mounted horizontally behind the television. The wireless power receiver would be connected to the separate box which looks like a sound bar and incorporates the wireless power transmitter.

Samsung has long emphasized a streamlined look for its TV sets, doing its best to minimize the rat’s nest of cords that run from the set to the nearest power outlet, cable box, and other peripherals. Now it may have found a way to truly cut the cord.

Could Samsung be on the cusp of a fully wireless TV? A recent patent hints that a Samsung TV without any pesky cables could be around the corner.

The patent was filed in March 2018 but only released publicly in late February of this year.

The patent revolves around a wireless power transceiver, which would make the prospective television the first of its kind to transmit power across the room rather than relying on a power cable – increasingly seen as an eyesore next to Samsung’s premium design sets.

The transceiver takes the form of a magnetic bar attached to the rear of the television, given that panels themselves are too thin to house anything of this kind. It would then require a separate power transmitter (plugged into the mains) to keep the TV running.

It’s worth noting that companies often patent devices that never make it to market. And there’s no guarantee this TV is a part of Samsung’s development road map. But two years ago at CES, it did roll out a set that eliminated HDMI ports from the TV and transferred them all to an external device, which was connected to the TV via a very thin, easily hidden cord. So the company certainly has shown an interest in doing away with cords. 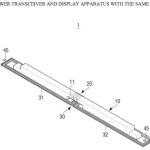 The patent proposes using electromagnetism to power the set, via a small box that would be mounted below the TV (about the size of a TV speaker bar). Presumably, the power cord to that box could be hidden in an entertainment center.

Samsung has a history of going big in its TV designs, often literally. At CES earlier this year, the company showcased a 219-inch set (a followup to last year’s 146-inch TV). The company has also put aside its rivalry with Apple, with plans to bring Apple’s iTunes store onto its sets later this spring.

See No Evil:
We’re not surprised to see Samsung investigating wireless technology, given its move over recent years to minimize the visual impact of connected wires and cables around their TVs.

High-end Samsung sets like the Samsung Serif TV usually ship with a OneConnect box, which hides most of the television’s ports out of immediate view. The OneConnect box still requires a thin, transparent cable running from the set itself – and the natural next step would be trying to get rid of this entirely.

Wireless charging is a burgeoning technology, though usually thought of in the realm of smartphones rather than premium QLED TVs. If Samsung manages to make it work for a TV’s hungry power needs, though, we could be looking at the future of home television design.

Samsung TV lineup 2019: every QLED and more coming this year

As always, it’s worth offering the usual reminder associated with patent coverage that the filing doesn’t necessarily mean Samsung has formal plans to do anything with this yet or to ever commercialize it. Still, it would no doubt be welcomed by some consumers who don’t want unsightly cables and tangles of wires running from their TVs throughout their home. And it’s definitely interesting to see Samsung keep trying to think about new ways to push the bounds of what it can offer consumers through its TV set design and manufacturing process.