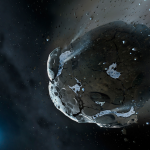 NASA is always keeping an eye on space rocks that get anywhere near Earth, and 2019 has been a relatively calm year in terms of close passes. A recently discovered asteroid is going to make a not-super-close pass of Earth later this week, and while it doesn’t pose much of a threat to our planet it’s worth mentioning simply because of its size.

The rock, known as 2019 DN, is slated to arrive at its closest point to Earth this coming Friday, March 8th. At its nearest distance the asteroid will still be around 13 lunar distances away. One lunar distance is equal to the space between the Earth and our Moon, so it’s clear the asteroid has little chance of disrupting Earth during its flyby, and that’s a very good thing considering its size.

If you spend any time around the internet traps, you may have noticed that there’s a bit of an asteroid frenzy going on.

One has already gone past us – on Monday, a space rock ‘the size of a jumbo jet’ flew quite close to our planet.

On Friday, astronomers are expecting a larger one; but despite what tabloids will tell you about it’s “imposing” size or breakneck speed, it’s mostly business as usual if we take a look at NASA’s chart of close approaches by near-Earth objects (NEOs).

As is usually the case with these whooshing space chunks, the first asteroid did not pose a threat. But it was interesting nonetheless, since skimming our planet at just 1.1 times the average distance to the Moon, it was slated to be the closest flyby of the year.

NASA estimates the asteroid to be between 91 and 200 meters wide. That’s a pretty sizable chunk of space debris as far as the Earth is concerned. It’s not the kind of rock that would pose a threat to humanity’s existence, but it would definitely cause some commotion if it were to come down above a populated area.

For the sake of comparison, the large Chelyabinsk meteor that streaked across the skies of Russia back in 2013 was around 20 meters wide. The asteroid became a fireball which exploded in the atmosphere with a force equivalent to over 400 kilotons of TNT, damaging thousands of buildings and injuring some 1,500 people.

In contrast, the rock that created the dinosaur-killing Chicxulub impact in Mexico was thought to be as large as 50 miles in diameter. If 2019 DN made a surprise appearance we wouldn’t be wiped out, but we’d definitely hear about it.

Meanwhile, the other visitor doing the tabloid rounds (and, for some reason, compared to the Great Pyramid of Giza in some places), is asteroid 2019 DN, expected to go past us on 8 March at around 16:19 UTC.

Preliminary scans have revealed that it measures roughly 90 to 200 metres in diameter (295 feet to 656 feet), but you don’t need to run for the hills. 2019 DN will be more than 10 times farther out than the Moon, so this is certainly not a doomsday situation.

We’ve been through this before. Just last November, some keen observers of NASA’s asteroid watch data kicked up a frenzy about giant asteroids “skimming” Earth, but everything that’s beyond Moon’s orbit is hardly worth a worry.

In fact, 2019 DN isn’t even the biggest asteroid coming this month – the slightly larger 2019 CD5, measuring 100 to 230 metres, should come by on 20 March, and it’s going to be slightly closer than this Friday’s visitor, too.

It’s easy to get excited when we remember that space rocks are constantly hurtling past Earth, but we’d suggest not to lose any sleep over it.

While there are plenty of NEOs yet to be discovered, the vast majority of them are probably harmless.

“Very few of these bodies are potential hazards to Earth, but the more we know and understand about them, the better prepared we will be to take appropriate measures if one is heading our way,” according to NASA.

The next time you see tabloids mention a doomsday asteroid hurtling our way, we suggest you check out NASA’s Near Earth Object program’s website for some actual data.

NASA takes every single space rock seriously, and it keeps an up-to-date record of close Earth approaches that it forecasts months and even years ahead of time. You can even browse the entire list online, if that’s your kind of thing