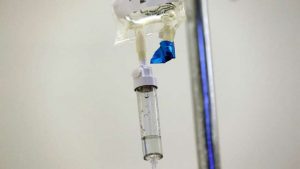 A team of Israeli scientists believes a cure for cancer is within reach, even optimistically predicting that it will be found within a year.

“We believe we will offer in a year’s time a complete cure for cancer,” Dan Aridor, of Accelerated Evolution Biotechnologies Ltd. (AEBi), told the Jerusalem Post.

Aridor’s team is working on MuTaTo, which according to the news outlet is comparable to a cancer antibiotic, with a multi-pronged approach similar to the treatment given to HIV patients.

The team told the Post that their treatment is a multi-target approach using a combination of several peptides for each cancer cell, reportedly eliminating the chance to be evaded by a mutation.

“We made sure that the treatment will not be affected by mutations; cancer cells can mutate in such a way that targeted receptors are dropped by the cancer,” Dr. Ilan Morad, AEBi CEO, told the news outlet. “The probability of having multiple mutations that would modify all targeted receptors simultaneously decreases dramatically within the number of targets used. Instead of attacking receptors at one time, we attack receptors three at a time — not even cancer can mutate three receptors at the same time.”

“Our cancer cure will be effective from day one, will last a duration of a few weeks and will have no or minimal side effects at a much lower cost than most other treatments on the market,” Aridor said. “Our solution will be both generic and personal.”

The development has not been tested in humans yet, but according to Aridor it has shown success in mice trials and is nearing the stage of clinical trial.