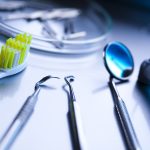 Braces
Braces are the first choice of many orthodontists to straighten teeth and fix faulty bites. They can be made of metal, ceramic, or clear plastic. Some are bonded to your teeth. Others are removable. You may have them put on a group of teeth or all of your teeth.

Traditional braces are attached using a system of brackets, wires and, in some cases, elastic bands. All braces put tension on your teeth to realign them.

Headgear
It may look medieval, but orthodontic headgear has been around only since the early 20th century. It’s a key fixture in some treatments to guide the face and jaws. The gear slips over the back or your head and attaches to your braces thanks to a wire in front of your teeth called a facebow or archwire. The tension the headgear pulls things into proper alignment.

If you need it, you’ll usually wear it for several hours at a time.

Dentures
More than 1 in 4 Americans age 65 and over are toothless. The answer? Dentures. False teeth are attached to a plate. Dentures can either sit on the gums, snap on posts implanted into the gum and jaw, or in newer cases, be screwed into implants. They can be full, replacing all the teeth, or partial, replacing just some.

Inlays / Onlays
Inlays are sometimes called amped-up fillings. They make up for tooth surface lost to decay or some other reason. They’re formed to the teeth and used to be gold. Now, they can be made of ceramic or a composite and made to match the color of your teeth more closely.

Onlays are similar, but they spill onto the outside surface of the teeth. They’re also ceramic or composite.

Crowns
Crowns and caps are basically the same thing — coverings for teeth. They’re used when the original tooth is damaged, weak, doesn’t fit well with your other teeth, is discolored, or needs to make room for a bridge.

Crowns strengthen the tooth and improve its appearance. They can be made of many materials in a number of shades.

Veneers
Unlike caps and crowns, which cover the whole tooth, veneers are thin pieces of a ceramic-type material that cover just the front of your teeth. They’re good for hiding broken, chipped, or stained teeth and can be fitted to cover gaps.

You can’t take them off. They’re bonded on permanently.

Bridges
These close the gap created by a missing tooth. Often, the teeth on either side of the gap, called the abutment teeth, have to be ground down. They’re fitted with crowns, and then the bridge — usually two crowns that fit over the abutment teeth and a false tooth attached to the crowns — is placed and bonded to the site. It can work for more than one tooth, too.

Implants
Another way to replace a missing tooth (or many) is through implants. They’re false teeth that don’t slip over the gum or aren’t bridged with other teeth. They’re anchored to your jaw.

A titanium post is surgically inserted into the jaw, an extension called an abutment is attached to the post, and a crown tops things off.

The process takes weeks because bone has to regrow around the post.

Occlusal Guards
These aren’t mouth guards like athletes wear. These guards, also called splints, are used at night to keep you from damaging your teeth when you grind them and to relieve temporomandibular joint (TMJ) pain.

A dentist or your orthodontist will fit you with one. They’re usually made of plastic-type material.

Retainers
Think of these as backups for your braces. They’re often used once your braces are off to keep your teeth from moving back. Made out of plastic, with wires that attach to your teeth to hold it in place, retainers are usually worn at night, though at first your dentist may tell you to wear them 24/7.

Your orthodontist may suggest a lingual, or tongue-side retainer. That’s a permanent wire that’s bonded to the inside of your teeth.

Flippers
A flipper is a temporary tooth attached via a plate (like a denture) or wires (kind of like a bridge). It has that name because you can easily flip it in and out.

You can have more than one or a set. They fill a hole before something more permanent (like a bridge, denture, or an implant) takes over. Some like them so much, though, and they’re so comparatively cheap that they become long-term plugs.

Palatal Expander
These metal devices are generally for kids. They widen your upper jaw and palate so teeth don’t get too crowded and your upper jaw fits better with your lower one.

The device, also called a rapid palatal expander, puts pressure on the upper teeth, spreading the still-growing palate to the desired width. The expander, which sits on the palate and presses metal plates against the teeth, is adjusted with a type of key.

Space Maintainers
Mostly used with kids who lose a baby tooth, “spacers” keep the spot open where the tooth was until a permanent tooth arrives. They’re normally a fixed, sturdy wire that stretches from one tooth to another, ensuring that those teeth don’t migrate into the empty spot.

Occasionally, a space maintainer is used until a false tooth is fitted, and once in a while they’re used to leave a space permanently open.