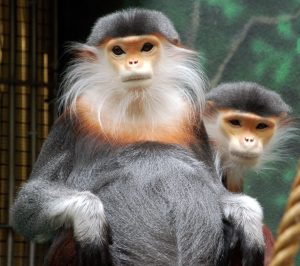 Six men were arrested in central Vietnam for killing and eating an endangered monkey while live-streaming it on a social media site, police said Friday.

The trafficking and consumption of rare and endangered species is widespread in Vietnam as many still believe in the healing and medicinal qualities of the animals’ body parts.

But the sale of the animals occurs on the black market, and consumers rarely broadcast the killing and eating of the creatures, which are protected under Vietnam’s conservation laws.

The six men, aged from 35 to 59, filmed themselves with a mobile phone eating a live langur monkey and streamed the gruesome video on Facebook on November 17.

They were finally identified and arrested on Thursday.

The suspects were identified and arrested on Thursday, and have reportedly confessed to violating the country’s wildlife protection laws for “endangered and previous animals”.

“It took time for us to figure out the suspects involved,” a police officer in central Ha Tinh province told reporters.

A police statement added one of the men bought the monkey from a hunter for 1.1 million dong (£38).

The men have been accused of violating regulations on protecting “endangered and precious animals” and they confessed to the crime, said a statement posted on Ha Tinh provincial police’s website.

One of the men had bought the monkey off a hunter for $49, said the statement.

Leaf-eating langurs are among the most endangered primate species in the world and are only found in the northern part of Vietnam.

The Southeast Asian country is also home to other endangered species, including the Red River giant soft-shell turtle, the mountainous Saola antelope, and the snub-nosed Tonkin monkey.

Although it is not clear which type of langur monkey was killed, all 12 species in Vietnam are under population strain, with five of them considered critically endangered, according to the Endangered Primate Research Center.

It comes months after officials in Vietnam urged residents to avoid eating dog meat, as part of a move to eradicate rabies.

Hanoi’s vice mayor Nguyen Van Suu also said that slaughtering dogs and cats for their meat was disturbing to foreigners and would “negatively impact the image of a civilized and modern capital”.

But critics say conservation protection laws are not enforced effectively, and poaching continues unchecked — feeding an appetite for rare and endangered species domestically and in neighboring China.

The Colobinae are a subfamily of the Old World monkey family that includes 61 species in 11 genera, including the black-and-white colobus, the large-nosed proboscis monkey, and the gray langurs. Some classifications split the colobine monkeys into two tribes, while others split them into three groups. Both classifications put the three African genera Colobus, Piliocolobus, and Procolobus in one group; these genera are distinct in that they have stub thumbs. The various Asian genera are placed into another one or two groups. Analysis of mtDNA confirms the Asian species form two distinct groups, one of langurs and the other of the “odd-nosed” species, but are inconsistent as to the relationships of the gray langurs; some studies suggest that the gray langurs are not closely related to either of these groups, while others place them firmly within the langur group.