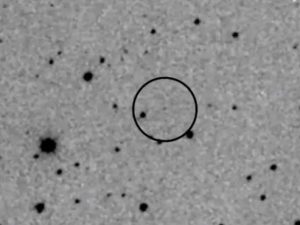 A mysterious “empty trash bag” object has been spotted floating above Earth.

The satellite is thought to be several meters across but is extremely lightweight, the astronomers who spotted it say.

The object is probably a piece of light material, such as metallic foil, that has been left over from a rocket launch. But it is not clear what rocket launch the object known as A10bMLz could have been launched from.

At the moment, the object is on a strange, highly elliptical orbit. Sometimes it comes as close as 600 kilometers from the Earth – but it swings around to be 1.4 times as far out as the Moon.

Because of its small mass, A10bMLz is very susceptible to radiation pressure from the Sun. That means its orbit changes “chaotically” on a scale of days to weeks, according to the London-based Northolt Branch Observatories (NBO) that analysed it.

It means that it is impossible to fully predict where it might be flying. It is being buffeted around in space like a plastic bag might be in the wind.

The object could re-enter Earth’s atmosphere within a few months, for instance, or might continue to fly around the Earth.

Such “empty trash bag” objects have been spotted before. But this is the first one that has ever been seen drifting at such a distant orbit.

The object was first seen by Hawaii’s Asteroid Terrestrial-impact Last Alert System (ATLAS) telescope. Further analysis by the NBO confirmed that the object was very light but relatively wide, as well as its strange orbit.