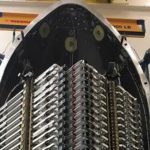 The first of many missions to establish a megaconstellation of satellites providing global broadband.

The Starlink mission is set to deliver those first 60 internet satellites to orbit later Wednesday, paving the way for a megaconstellation that will eventually contain over 12,000 of the miniature internet-providing beasts.

The launch window is currently scheduled to open at 7:30 p.m. PT and will close at 9 p.m. PT on May 15. SpaceX has said the weather conditions are fine and we look good to go for launch. As is par for the course for SpaceX now, the company will attempt to land the Falcon 9 booster on a droneship known as “Of Course I Still Love You,” floating along in the Atlantic Ocean. Around an hour into the mission, the satellites will be deployed.

If you’re the kind of person who loves a spaceship and wants to watch along, you can follow live at the link below. SpaceX generally starts streaming around 15 minutes prior to launch (7:15 p.m. PT in this case).

Starship is designed to be a fully reusable launch system, and is intended to transport as many as 100 people at a time to and from the moon or Mars.

On the call Wednesday, Musk clarified that SpaceX’s recent fundraising rounds “have been oversubscribed.” He said SpaceX has the funding needed to build and launch enough Starlink satellites to begin using the network.

“At this point it looks like we have sufficient capital to get to an operational level,” Musk said.

The first 60 satellites will be dropped off at an altitude of approximately 270 miles (440 kilometers) above the Earth, if everything runs smoothly, and then they will gently propel themselves out to an orbit of about 340 miles (550 kilometers).

This will be the third time this particular Falcon 9 booster has ascended to space, according to SpaceX, with two previous flights coming in September 2018 and January 2019.

Musk has tried to temper expectations of this first, historic deployment of satellites, saying that “much will likely go wrong” and these first 60 satellites are a test, providing a demonstration of Starlink’s future capabilities. Another six launches will be required before even “minor” coverage is offered.

SpaceX launched two demonstration satellites in February 2018, but much of the program — and the satellites’ design — remained unknown. Although Musk fired the head of the Starlink program – a vice president who Jeff Bezos promptly hired to develop a similar network – in June, SpaceX has continued to advance the program quickly. In filings with the Federal Communications Commission, SpaceX noted a few changes to its plans. SpaceX also submitted an application this year to operate 1 million “earth stations” in the U.S., key to connecting the satellites to the ground.

Musk said SpaceX will need six more launches, with 60 satellites per launch, to get “minor coverage” for the internet network. A dozen launches, or 720 satellites, would bump the network to “moderate” coverage,” he added.

“This is one of the hardest engineering projects I’ve ever seen done,” Musk said.

He went into more technical details about the satellites’ design and capabilities than previously disclosed. Each Starlink satellite has “about a terabit of useful connectivity,” Musk said. The satellites will “automatically maneuver around any orbital debris,” he said, to avoid collisions in space.

“There’s a lot of new technology on the satellite,” Musk said.

The company will continue to develop and advance Starlink as the program continues, Musk promised. SpaceX plans to rapidly deploy Starlink, scaling its production and launch rate to between 1,000 satellites to 2,000 satellites per year. If SpaceX is able to stick to its current Starlink schedule, Musk said “SpaceX will have the majority of satellites” in orbit around the Earth within two years.

SpaceX represents one of several of these constellations in development, competing with Softbank-backed OneWeb, Amazon’s Project Kuiper, Canadian operator Telesat and more. These ambitious satellite networks will require intensive capital, with some industry officials estimating costs running as high as $5 billion.

The satellite constellations expect to offer broadband speeds comparable to fiber optic networks, according to federal documents, by essentially creating a blanket connection across the electromagnetic spectrum. The satellites would offer new direct-to-consumer wireless connections, rather than the present system’s redistribution of signals.

Posted in Internet Services, IT, Space.