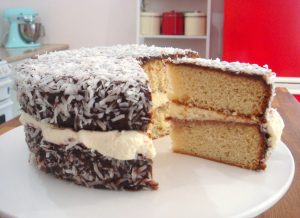 A woman died while competing in a cake-eating contest to mark Australia Day on Sunday.

Contestants were recorded speed-eating lamingtons, a type of traditional sponge cake covered in chocolate and sprinkled with desiccated coconut, at an event in Hervey Bay, Queensland.

That was when the woman, who remains anonymous, choked and began having a seizure, the incident occurred at around 2 p.m. local time.

She was given CPR on the scene and rushed to the hospital, where she was later pronounced dead.

The Beach House Hotel, where the event was taking place, posted a statement on its official Facebook page expressing its “deepest condolences.”

“We acknowledge and thank our supportive patrons, staff, and the Queensland Ambulance Service for their prompt and professional response while this tragic incident was unfolding,” the establishment wrote. “The hotel staff have been offered professional support while our thoughts firmly remain with the family at this challenging time.”

Cell phone footage showing a group of people eating the cakes was broadcast by Australia’s 9 News. The pub’s security guard and manager were among the first to rush to the woman to perform CPR, they report.

By the time she was taken to Hervey Bay Hospital, there was nothing that could be done to save her.

Many took to Facebook to share their condolences for the woman who died, with one writing: “As the mother of a now deceased epileptic daughter myself my heart-felt condolences and respect are shared with all involved. I am more than certain that everyone present put in a gigantic effort to revive and resuscitate her.”

“My heart goes out to the family, [and] also to the staff that worked so hard to make Australia Day special day for all their patrons,” another Facebook user said. Another wrote, “Such a tragic ending to a wonderful day of celebrations.”

The bakery that made the lamingtons, Top of the Bay Bakery, also broke its silence on Facebook regarding the incident.

“We are deeply saddened by the tragic incident at the Beach House Hotel,” the bakery wrote. “Our heartfelt condolences go out to the family.”

The local broadcast station says this is an annual tradition for Australia Day.