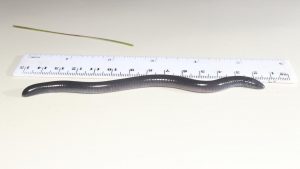 A strange new species of worm-like amphibian which was recently discovered in Panama has been named after President Donald Trump, by a company that says it wanted to raise awareness about the problem of climate change.

U.K. sustainable construction firm EnviroBuild paid $25,000 for the right to name the amphibian Dermophis donaldtrumpi at an auction hosted by the international non-profit environmental organization Rainforest Trust. Profits from the auction—where the naming rights to several new species were sold—will go towards the funding of conservation projects.

D. donaldtrumpi is a type of caecilian—a group of limbless amphibians resembling serpents or worms which mostly live in the tropics.

The group was named after the Latin word “caecus” which means “blind” due to the fact that caecilians have rudimentary eyes which are only capable of detecting light or dark, something that EnviroBuild also took into account when choosing a name.

“Capable of seeing the world only in black and white, Donald Trump has claimed that climate change is a hoax by the Chinese,” EnviroBuild co-founder Aidan Bell said in a statement.

Caecilians—which use sensory tentacles to find prey—live the vast majority of their lives underground and researchers think that they lost their limbs around 60 million years ago as an adaptation to this burrowing lifestyle.

Usually, new species are named by the biologists who discover them, so this was “too good an opportunity” to miss, according to Bell. The strategy of selling naming rights at auction to fund conservation was first created by Rainforest Trust CEO Paul Salaman 25 years ago. In total, the latest auction raised $182,500 in exchange for the naming rights to 12 Latin American species.

The new name will have to be reviewed by scientists, although this is not the first time that species have been named after presidents. For example, former President Barack Obama has at least 14 species which bear his namesake, a record among U.S. heads of state.

“EnviroBuild is not an overtly political organization, but we do feel very strongly that everyone should do everything they can to leave the world in a better way than they found it,” Bell said. “It was saddening to see another year without significant progress at the most recent round of COP talks in Katowice. Further progress on the essential technical elements was blocked by the unusual alliance of the U.S., Russia, Saudi Arabia and Kuwait who also blocked the adoption of a key scientific report.”

“As Demorphus donaldtrumpi is an amphibian, it is particularly susceptible to the impacts of climate change and is therefore in danger of becoming extinct as a direct result of its namesake’s climate policies,” he said.

Protecting the world’s remaining rainforests is now acknowledged as one of the most effective ways to mitigate the impacts of climate change, according to Chris Redston, a spokesperson for Rainforest Trust U.K.

“Yet every day nearly 70,000 acres of rainforest are destroyed forever,” Redston said. “This is not only one of the main causes of climate change, but it is also having a devastating impact on endangered wildlife, indigenous communities and the planet’s weather patterns.”